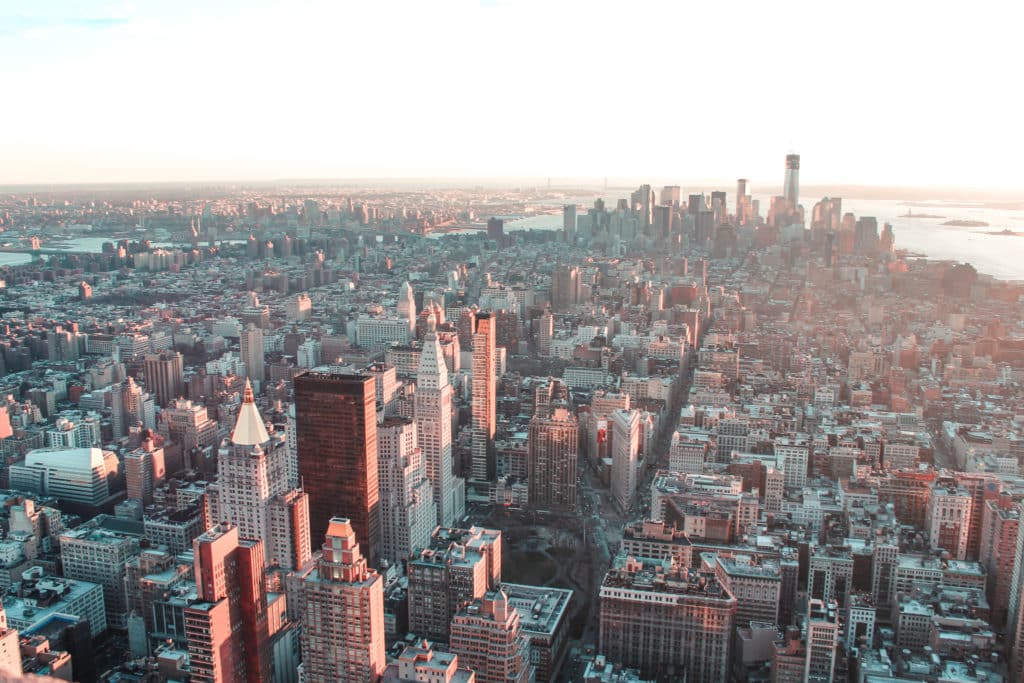 Looking for quotes and Instagram captions about New York City guaranteed to inspire you? Here are some of my favorites!

It’s no secret that I love New York. New York is one of the greatest cities in the world, so it’s no surprise that so many famous writers, musicians, and artists have a lot to say about the city.

Without further ado, here are some of the best quotes about New York City!

“The city seen from the Queensboro Bridge is always the city seen for the first time, in its first wild promise of all the mystery and beauty in the world.”

“I believe in New Yorkers. Whether they’ve ever questioned the dream in which they live, I wouldn’t know, because I won’t ever dare ask that question.”

“London is satisfied, Paris is resigned, but New York is always hopeful. Always it believes that something good is about to come off, and it must hurry to meet it.”

“Practically everybody in New York has half a mind to write a book — and does.”

“I regret profoundly that I was not an American and not born in Greenwich Village. It might be dying, and there might be a lot of dirt in the air you breathe, but this is where it’s happening.”

“Make your mark in New York and you are a made man.”

“Whoever is born in New York is ill-equipped to deal with any other city: all other cities seem, at best, a mistake, and, at worst, a fraud.”

“There is something in the New York air that makes sleep useless.”

“My favorite thing about New York is the people, because I think they’re misunderstood. I don’t think people realize how kind New York people are.”

“The true New Yorker secretly believes that people living anywhere else have to be, in some sense, kidding.”

“I love New York, even though it isn’t mine, the way something has to be, a tree or a street or a house, something, anyway, that belongs to me because I belong to it.”

“I would give the greatest sunset in the world for one sight of New York’s skyline.”

You may also enjoy… The Ultimate NYC Bucket List: 75+ Things to Do in New York City

“You can do what you like, sir, but I’ll tell you this. New York is the true capital of America. Every New Yorker knows it, and by God, we always shall.”

“One can’t paint New York as it is, but rather as it is felt.”

“I wake up every morning and say to myself, ‘Well, I’m still in New York’. Thank you, God.”

“Living in California adds ten years to a man’s life. And those extra ten years I’d like to spent in New York.”

“Give me such shows — give me the streets of Manhattan!”

“A hundred times have I thought New York is a catastrophe, and fifty times: It is a beautiful catastrophe.”

“For me, New York is comfortable, not strange.”

“I get out of the taxi and it’s probably the only city which in reality looks better than on the postcards, New York.”

“I go to Paris, I go to London, I go to Rome, and I always say, ‘There’s no place like New York. It’s the most exciting city in the world now. That’s the way it is. That’s it.'”

“When you leave New York, you are astonished at how clean the rest of the world is. Clean is not enough.”

“I look out the window and I see the lights and the skyline and the people on the street rushing around looking for action, love, and the world’s greatest chocolate chip cookie, and my heart does a little dance.”

“New York is an ugly city, a dirty city. Its climate is a scandal, its politics are used to frighten children, its traffic is madness, its competition is murderous. But there is one thing about it – once you have lived in New York and it has become your home, no place else is good enough.”

“Anytime four New Yorkers get into a cab together without arguing, a bank robbery has just taken place.”

“At night… the streets become rhythmical perspectives of glowing dotted lines, reflections hung upon them in the streets as the wistaria hangs its violet racemes on its trellis. The buildings are shimmering verticality, a gossamer veil, a festive scene-prop hanging there against the black sky to dazzle, entertain, amaze.”

“I get out of the taxi and it’s probably the only city which in reality looks better than on the postcards, New York.”

“For me, New York is comfortable, not strange.”

“I love that about New York: You just dress the way you want to dress and feel really comfortable because nobody is judging. You can just be yourself, and it’s perfectly normal.”

“New York has a trip-hammer vitality which drives you insane with restlessness if you have no inner stabilizer…. In New York, I have always felt lonely, the loneliness of the caged animal, which brings on crime, sex, alcohol, and other madnesses.”

“And New York is the most beautiful city in the world? It is not far from it. No urban night is like the night there…. Squares after squares of flame, set up, and cut into the aether. Here is our poetry, for we have pulled down the stars to our will.”

“When I’m in New York, I just want to walk down the street and feel this thing, like I’m in a movie.”

“New Yorkers are born all over the country, and then they come to New York City and it hits them: Oh, that’s who I am.”

“People go to LA to ‘find themselves’, they come to New York to become someone new.”

“Sometimes, from beyond the skyscrapers, the cry of a tugboat finds you in your insomnia, and you remember that this desert of iron and cement is an island.”

“There is more sophistication and less sense in New York than anywhere else on the globe.”

“Cities have sexes: London is a man, Paris a woman, and New York a well-adjusted transsexual.”

“It was never built for the comfort and happiness of its citizens, but to astonish the world.”

“The city is like poetry; it compresses all life, all races and breeds, into a small island and adds music and the accompaniment of internal engines.”

“To Europe she was America. To America, she was the gateway to the earth. But to tell the story of New York would be to write a social history of the world.”

“Being a New Yorker grounds you in every way. Before you walk out of the house, you can dress in the nicest clothes and be whoever you think you are, but when you’re on those streets, you’re just in the school of fish.”

“Anything is possible. This is New York.”

“Curtains forcing their will against the wind, children sleep, exchanging dreams with seraphim. The city drags itself awake on subway straps; and I, an alarm, awake as a rumor of war, lie stretching into dawn, unasked and unheeded.”

“By comparison with other less hectic days, the city is uncomfortable and inconvenient; but New Yorkers temperamentally do not crave comfort and convenience—if they did they would live elsewhere.”

“A concrete jungle where dreams are made of. There’s nothing you can’t do. Now you’re in New York. These streets will make you feel brand new. Big lights will inspire you.”

“In New York, the opportunities for learning, and acquiring a culture that shall not come out of the ruins, but belongs to life, are probably greater than anywhere else in the world.”

“Pull up the shades so I can see New York. I don’t want to go home in the dark.”

Which of these quotes about New York City is your favorite?

I would say to say my favorite is the first one on this list from F. Scott Fitzgerald in The Great Gatsby: “The city seen from the Queensboro Bridge is always the city seen for the first time, in its first wild promise of all the mystery and beauty in the world.”

I love that because that’s how I feel every time I drive across the Queensboro Bridge!

I hope you enjoyed these famous quotes about New York City.

For more posts about New York, be sure to read the following: