When Is the Best Time to Visit New York City?

Wondering when the best time to visit New York City is?

According to this New Yorker… October through December!

Fall and Christmas are my favorite times of the year in New York. But New York is a great destination to visit year-round, and there are pros and cons to visiting at different times.

Related: The Ultimate NYC Bucket List: 75+ Things to Do in New York City

Here’s an in-depth look at what it’s like to visit New York at every time of the year: 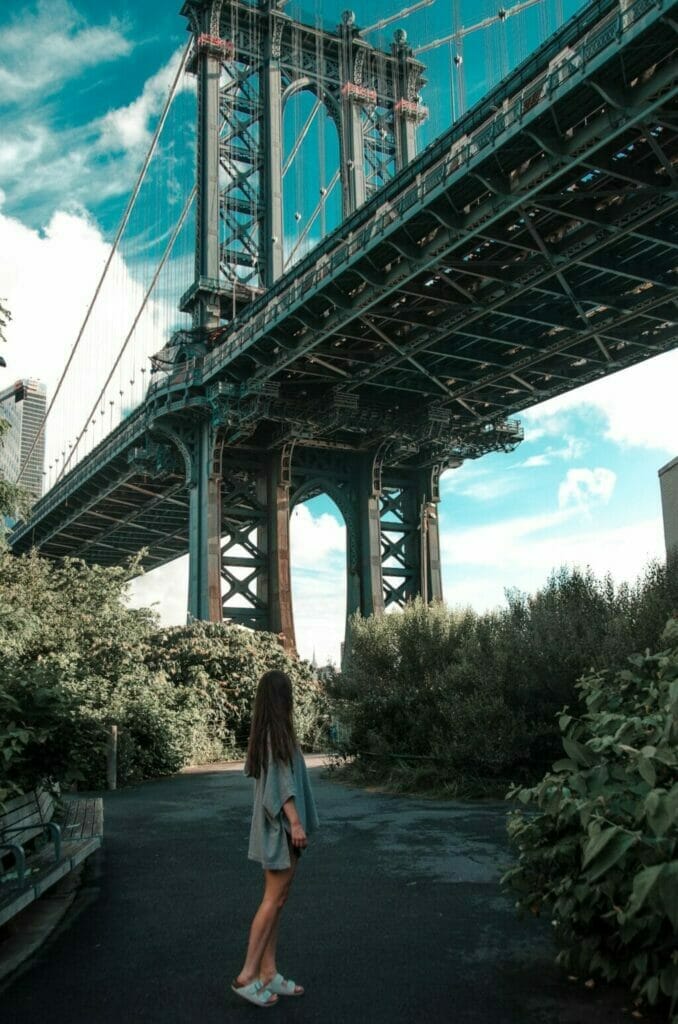 In addition to a population of over 8 million people, more than 60 million tourists come to New York City every year (most of them during the high season!)

High season: High season in New York is summer (July and August) and the holiday season (November and December.) These are the most popular times of the year for tourists to visit, leading to high crowds. You’ll also find the highest prices during these times of year.

Shoulder season: Falling between high season and off season is shoulder season. In New York, shoulder season occurs in the spring (April through June) and fall (September and October.) Spring and fall are pleasant times to visit in terms of weather, lower crowds, and lower prices.

Off season: January through March are the off season in New York, mainly due to the harsh winter weather at this time of year. However, this can be a great time to visit and score some good deals if you don’t mind the cold. The first week of January is also a little-known time to visit for experiencing all the holiday magic of New York without the massive crowds. 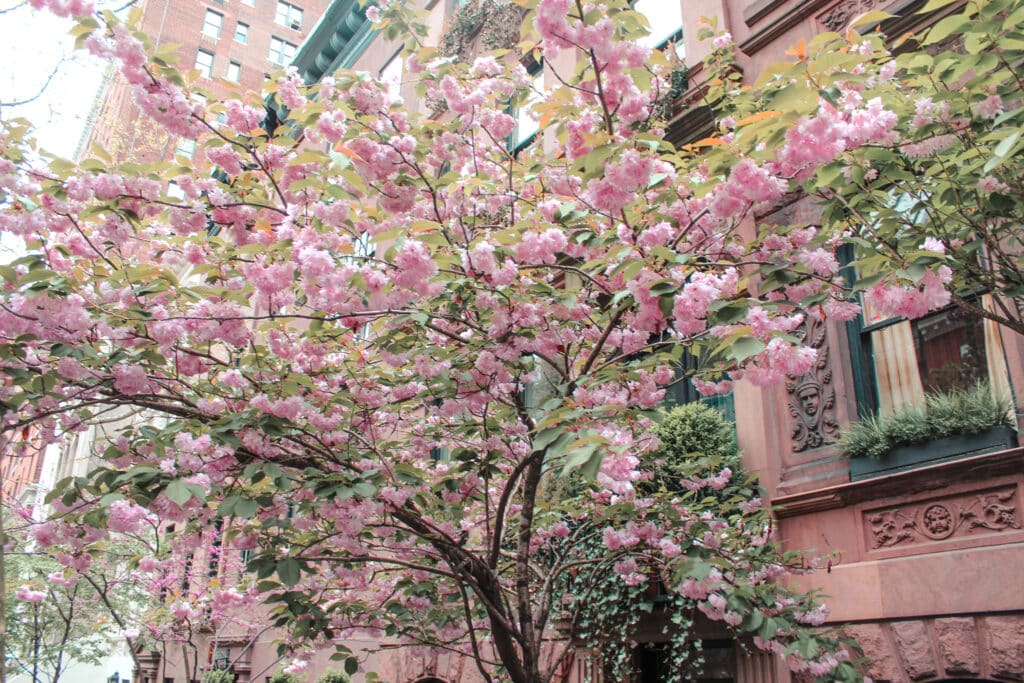 Spring is a great time to visit New York. April through mid June is shoulder season, and crowds are lower than during the summer months.

The weather is also very nice in the spring, a pleasant middle ground between freezing winter that chills you to the bone and summer heat so strong you’ll feel like you’re melting.

Everything is in bloom in New York in the spring. You’ll be blown away by how pretty it is!

You can find better deals on hotels in New York during the spring. This is a good time of year to plan a trip to New York You if you want to save some money. 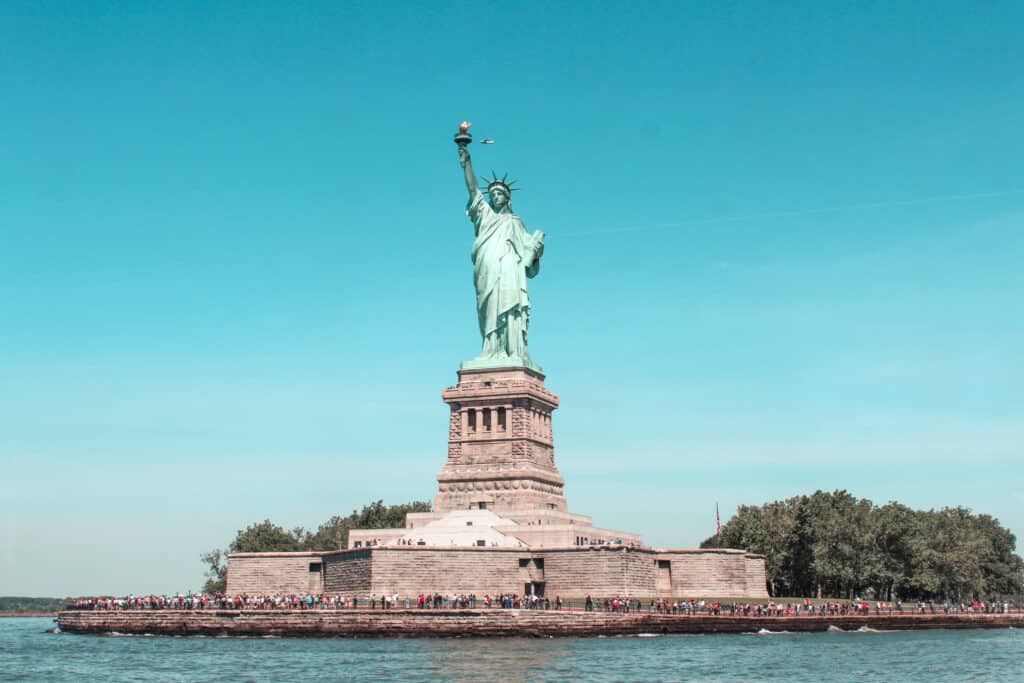 Summer is one of the most popular times of the year to visit New York.

It’s also a very hot time in New York. Mid June through August are the hottest months of the year, with temperatures in the 80s and even 90s most days.

I am hugely biased against hot weather and so summer is my least favorite season in New York. It’s also the time of year many New Yorkers leave the city, but tourist crowds are high.

If you don’t mind the heat, summer is a great time to visit New York because there is a lot going on. There are so many fun outdoor and indoor things you can do in the summer. 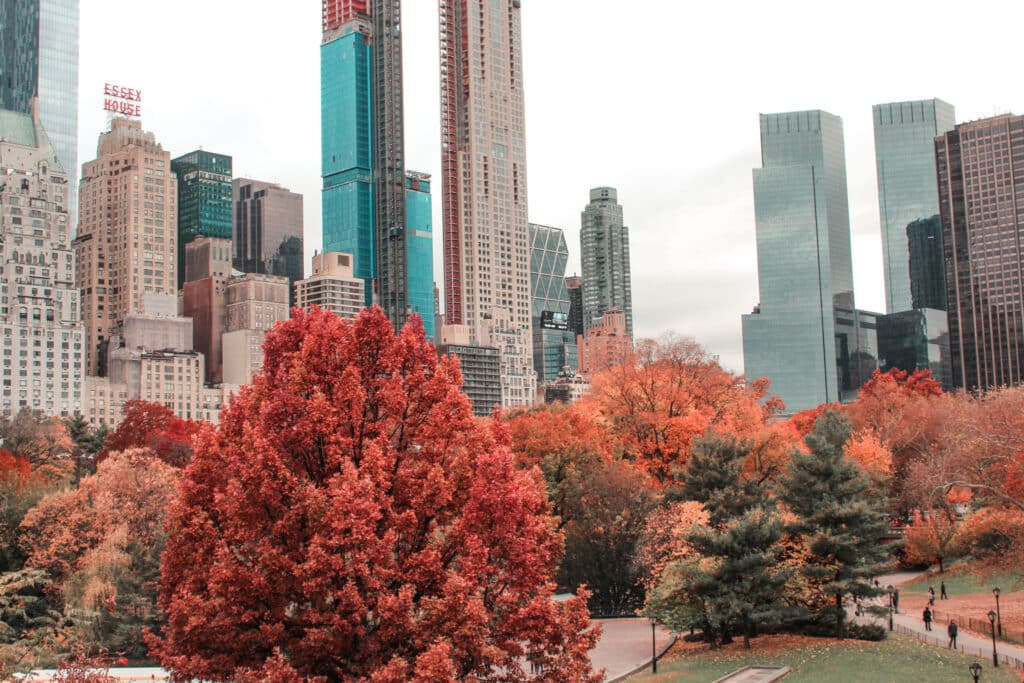 New York in the fall is absolutely beautiful. It’s probably my favorite time of the year in New York (tied with Christmas) and a great time to visit.

September and October are shoulder season, when tourism levels aren’t as high. You can enjoy lower crowds, lower prices, and lower temperatures compared to the summer months.

The weather is very pleasant in New York at this time of year and you will fall in love with the changing colors of the leaves at Central Park and the Cloisters. (You cannot visit New York in the fall without visiting the Cloisters – this is my number one tip!) 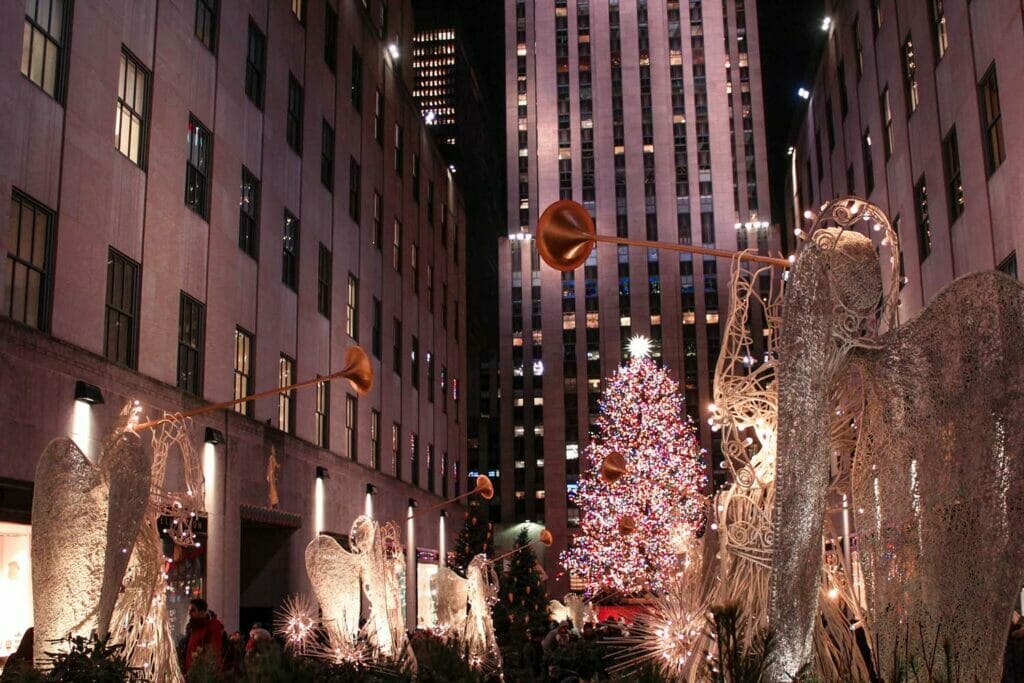 Winter in New York lasts from November through March.

Mid November through early January is the best time to visit New York if you want to experience the Christmas season. I highly recommend visiting during this time of year, because Christmas in New York is something everyone should experience at least once.

The crowds can be insanely high, but if you pick a week in early December (instead of right around Thanksgiving or Christmas) you will have better luck.

Be prepared to pay top dollar when visiting New York at this time of year!

January through March is the part of winter where New York typically experiences extremely harsh weather. Expect bitterly cold weather and some snow.

If you can handle the cold, this is a great time to visit since it’s the off season. The first week of January is also one of the best times to visit to experience all of the Christmas decorations and events while they’re still going, with none of the crowds.

Related: Festive Things to Do in Miami at Christmas

No matter what time of year you choose to visit New York, you will have a great time.

Although New York isn’t exactly known for being cheap, you can save money at any time of the year with the New York Pass. This is a sightseeing pass that gives you access to most of New York’s top tourist attractions all for an extremely discounted price.

I highly recommend the New York Pass for first-time visitors, families with kids, or anyone who wants to pack a lot of sightseeing into their trip to New York.

Looking for more New York travel tips? Here are some of my favorites:

10 Common New York Tourist Mistakes to Avoid: Must-read for anyone who has never been to New York before. Don’t make these rookie mistakes when visiting New York!

New York Pass Review: The New York Pass is a sightseeing pass that gives you access to dozens of New York’s top attractions for a discounted price. This is my honest review of it.

18 Best Boutique Hotels in New York City: Want to stay somewhere unforgettable on your trip to New York? Here are the best boutique hotels in the city! 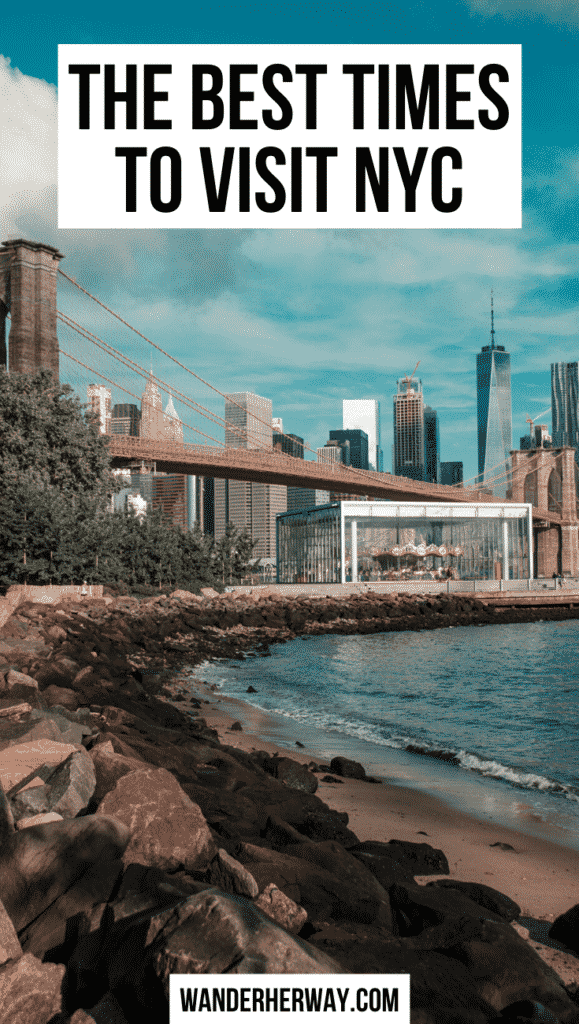