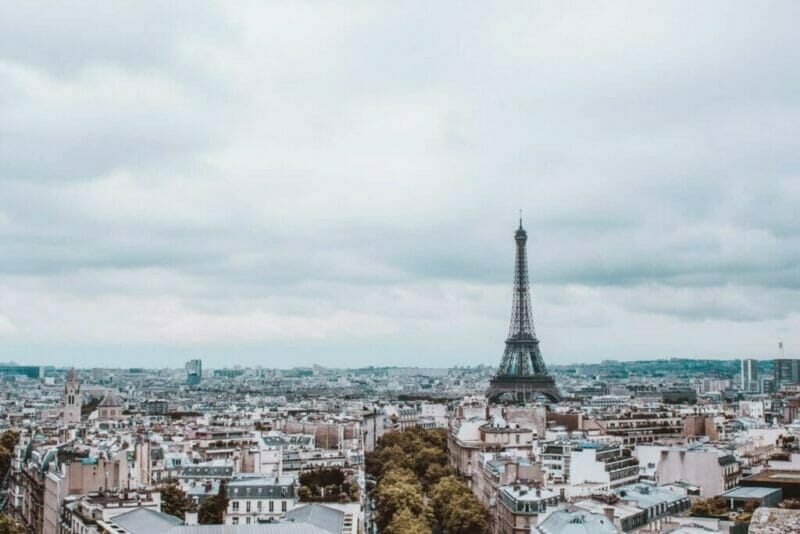 10 Tourist Scams in Paris to Avoid

Are you traveling to Paris soon? Here are the top 10 tourist scams in Paris to look out for.

While Paris is generally a very safe city, unfortunately it’s also home to a lot of scammers preying on tourists. When I lived in Paris, I constantly saw scam artists trying to con unsuspecting tourists all the time and was even accosted by some of them myself.

From classic Paris pickpockets to other less-known scams, here are the things to watch out for:

Where are scammers in Paris?

Most scam artists operate in the more touristy areas of Paris. I have noticed the highest concentration around the Eiffel Tower, Arc de Triomphe, Notre Dame, the Louvre, and Sacré-Cœur.

During peak tourist season (June through September and around the holidays) they are out in full force. So if you’re traveling at this time, you’ll want to be extra vigilant.

How to deal with scammers

I’m about to discuss 10 of the most common tourists scams in Paris so you will know the exact warning signs to look out for. The best way to deal with scammers is to totally disengage yourself from them. Ignore them, walk right past them, avoid eye contact, pretend like you can’t hear them or don’t understand English. etc. You can spot a lot of these scams from a mile away, so you can just cross the street to get away from them, or walk in the opposite direction.

If you want to have a little fun with the scammers (which sometimes I did just because I got so annoyed with them) you can play along with the scam to waste their time. But in most situations, the best solution is just disengaging yourself from them entirely.

General tips to avoid being targeted for scams

1. Don’t dress like a tourist. The more you blend in, the less you will be hassled by scammers. Don’t wear the “typical American” tourist uniform of t-shirt, shorts, and flip-flops. Don’t wear a fanny pack. And definitely don’t walk around carrying a selfie stick!

2. Don’t speak English really loudly. The fastest way to make yourself a target for scammers or pickpockets is by walking around in a group loudly speaking English. When I went anywhere by myself in Paris, I was almost never hassled. But if I was ever walking around with my friends or family when they came to visit, I was extremely aware of how loud we were being and how much attention we were drawing to ourselves by speaking English.

4. Don’t be afraid to be rude. This is one of the EASIEST ways to avoid becoming the victim of a scam in Paris. Most scammers prey on people’s politeness and sympathies. You can avoid 99% of all scams if you just totally ignore any stranger that tries to engage you. Stare straight ahead, act like they don’t exist, pretend you can’t hear them, etc.

5. Stay away from extreme crowds. The most common place for a scam or theft to occur is in a crowded area. Whether it’s the swarm of people fighting to see the Mona Lisa at the Louvre, a crowded Metro platform, or a packed sidewalk on the Champs-Elysées, try to disengage yourself from huge crowds until they disperse, or take an alternate route.

Now without further ado, here are the top 10 most common scams in Paris and how to avoid them:

This is one of the most irritating yet common scams in Paris. Usually it will happen when you’re walking along the Seine or near the Eiffel Tower. Someone will approach you with a gold ring that they “found” and ask you if you dropped it. They will expect you to say no, and then they will pretend to examine the ring and exclaim how valuable it is. They’ll then attempt to sell you the ring for a good price (of course, the ring is total junk.)

The friendship bracelet scam is one of THE most annoying to me. Basically, there are a lot of guys hanging out around Sacré-Cœur in Montmartre. It’s almost impossible to avoid them as you’re walking up the hill to the church. What they will do is come up to you, act really friendly, and start tying some strings around your wrist. They’ll quickly braid a “friendship bracelet” onto your wrist and then demand that you pay for it. (So much for being friendly.)

An added bonus for this one is that they may have a second person who comes up behind you while you’re distracted by the bracelet scam and pickpockets you.

How to avoid it: These guys can be pushy, so be equally pushy back if they won’t leave you alone. Ignore them, cross your arms, and walk away. 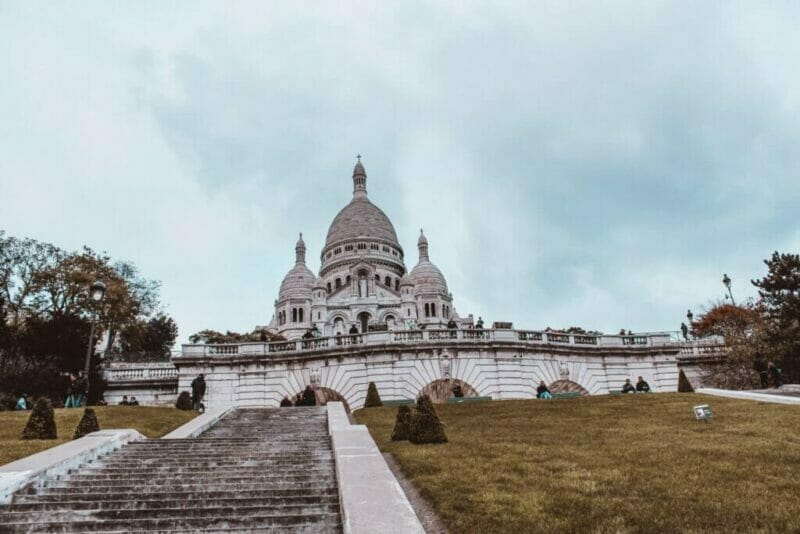 While not exactly a “scam” pickpockets are common in Paris and the last thing you want is to end up with your wallet or cellphone stolen. The main places that Paris pickpockets operate are crowded tourist sites like the Eiffel Tower, Arc de Triomphe, Champs-Elysées, Notre Dame, etc. There are also some common pickpocket tricks that can occur at restaurants and train stations, which I will discuss in further detail later on in this post.

How to avoid it: Don’t carry a lot of cash or valuables (like your passport) on your person. Try not to keep things like your wallet or cellphone in your back pocket or an exterior pocket of your purse/backpack. Instead, keep things tucked away securely or even hidden in a secret pocket like the one in this travel scarf. Stay alert, especially when you’re in crowded tourist areas. Try to avoid large crowds where people are brushing up against you and there isn’t much space to move.

This is another really annoying scam that I’ve encountered a lot in Paris, mainly around Notre Dame and the Louvre/Tuileries Gardens area. What will happen is a few women will come up to you asking you to sign a petition. It’s always for some noble cause like women’s education or support for the deaf, but of course it’s all fake. They’ll ask for your signature and then aggressively demand a “donation” for their cause after you sign.

How to avoid it: You will have to straight up dodge these women. They’re really easy to spot because they walk around carrying clipboards. Usually they’ll approach you saying “Do you speak English?” at which point you can just give them a confused look and walk away.

These scammers strike when you’re enjoying a nice stroll along the Seine or wandering around at the Eiffel Tower. A guy will come up to you and try to give you a rose as a “gift.” Aw, how nice! When you accept the “gift” he will then aggressively ask for payment. Alternatively, the scammer will come up to a couple, give the girl a rose, and then demand that the boyfriend/husband pay for it.

How to avoid it: Change your path, cross your arms, and avert your gaze when you see one of these guys coming towards you with their arm outstretched holding a rose. 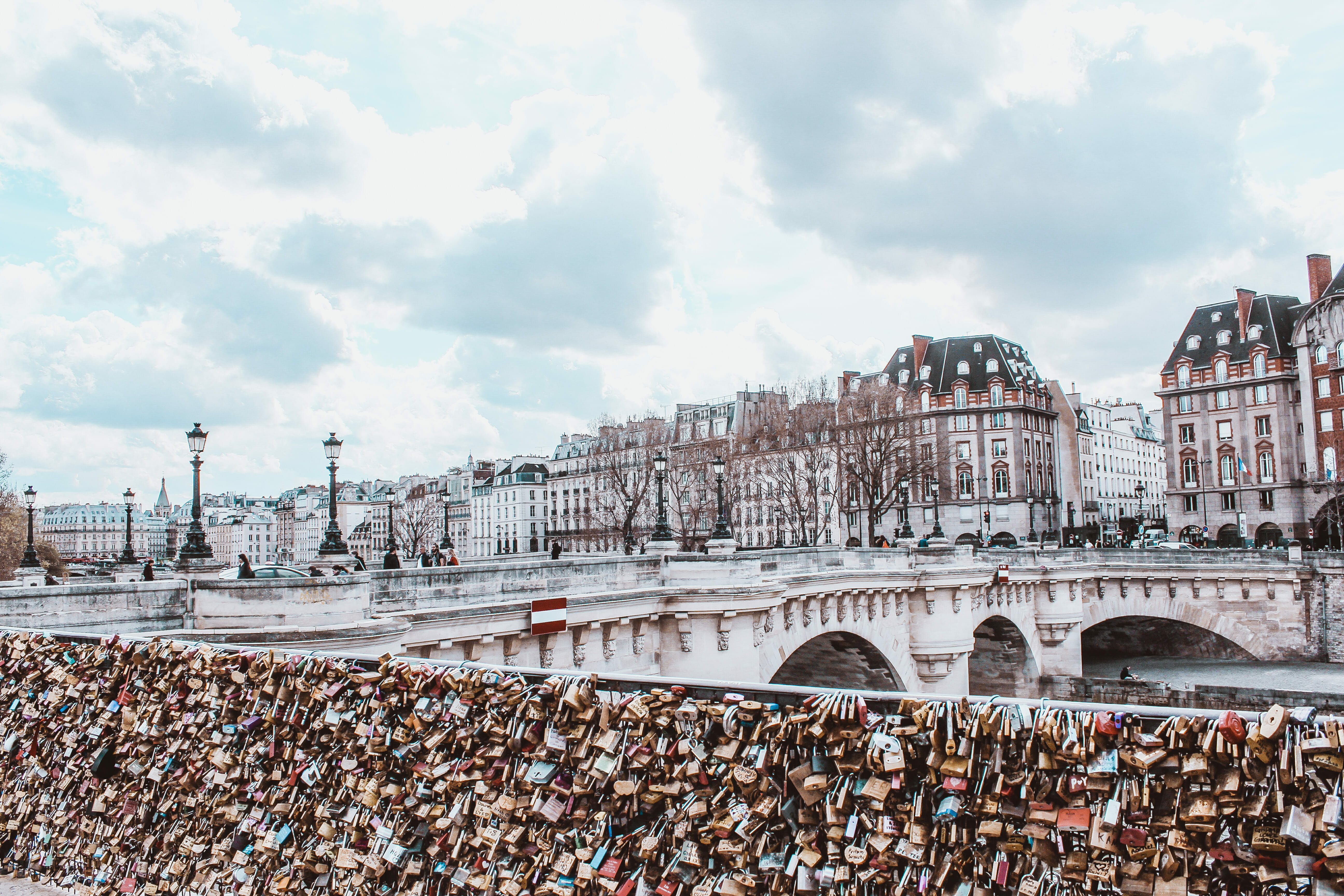 6. Pickpockets on the Metro

While pickpockets can be anywhere, one common place for them to operate is on the Metro, especially on crowded trains. Usually they will work in pairs and strike when the train stops and people are getting on and off. One person will distract you by bumping into you, grabbing you, or getting in your personal space, while the other person will then quickly snatch your wallet/cellphone/jewelry and hop off the train.

How to avoid it: ALWAYS be vigilant when you’re on a crowded train and keep an eye on the people around you. If possible, move to a less crowded car. Try to have a hand on your valuables at all times and make sure you aren’t keeping things like your wallet or cell phone in your back pocket or an exterior pocket of your bag where they can easily be snatched.

If you’re sensing a theme here, pickpockets will typically try to cause a commotion and then steal your valuables while you’re distracted. At outdoor cafes and restaurants, here’s how it works: Someone will come up to you and start talking, while shoving something in your face, maybe a flyer or a petition of some sort. They will hold it over your cell phone if it’s laying on the table and then stealthily grab your phone while they keep talking to distract you.

How to avoid it: Don’t lay your cell phone or any other valuables on the table at a sidewalk cafe! Keep your phone in your pocket or purse/backpack. If someone approaches your table, firmly tell them to leave or just ignore them until they go away.

There are a lot of scams and ways you can get ripped off at restaurants and cafes in Paris. Mainly, these scams occur in really touristy areas, such as around the Eiffel Tower and the Champs-Elysées. Some variations of this scam can be giving you a menu with no prices and then presenting you with an exorbitant bill, giving you a special “tourist menu” with extremely inflated prices, or sneakily adding items you didn’t order to your bill.

How to avoid it: Basically, don’t eat at any restaurant/cafe that’s right by a major tourist landmark unless you’ve researched it in advance first. Not only are you likely to get ripped off, the food is probably going to be terrible too. Try to research some great restaurants in Paris before your trip and look for places that are off the beaten path! 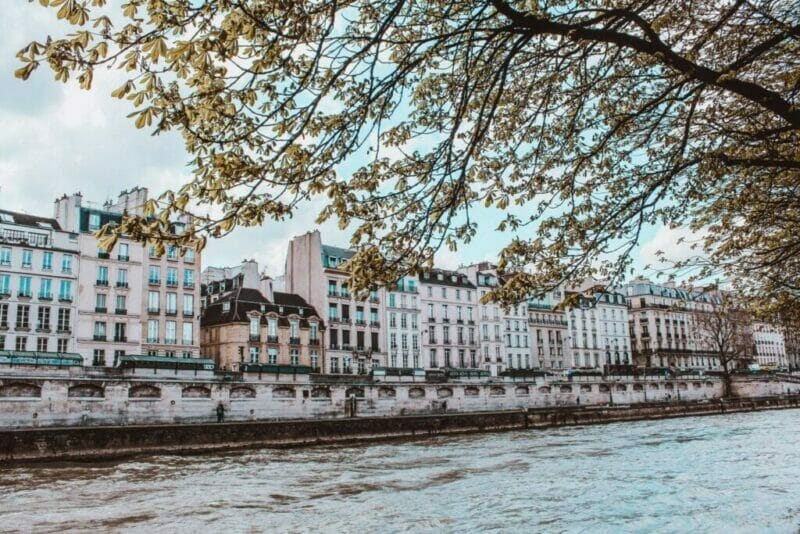 This is one of the oldest scams in the book, but people still fall for it all the time so I thought I’d include it. How it works is someone on the street will be demonstrating a little “game.” They will have three shells or cups on a table with a ball hidden under one of them. The scammer will quickly shuffle the shells or cups around and ask you to guess which one is hiding the ball. You make a bet, and if you guess correctly, you’ll get double your money back.

The game looks deceptively easy, but of course it’s all rigged. The scammer uses sleight of hand to remove the ball so you have a zero chance of winning. They will also have people working with them in the crowd who pretend to play and make the game look extremely easy.

How to avoid it: Pretty simple, just keep walking if you see one of these games going on.

There are a lot of variations on this scam, with the end goal being to steal your money. Usually someone will approach you while you’re at an ATM and offer to “help” you or tell you that the ATM is broken and suggest that you enter your PIN. They will watch you enter your PIN and then snatch your ATM card and run off with it to withdraw money somewhere else.

How to avoid it: If anyone approaches you while you’re using an ATM, stop what you’re doing and make a big scene until they leave. Make sure that you keep hold of your ATM card/wallet. Try to use ATMs inside banks if at all possible.

So these are the 10 most common scams in Paris. I would not worry too much about scammers on your trip to Paris, because now that you know how to protect yourself from these scams, you can easily avoid them. Enjoy your trip to Paris!

Looking for other Paris posts? Here are some of my favorites! 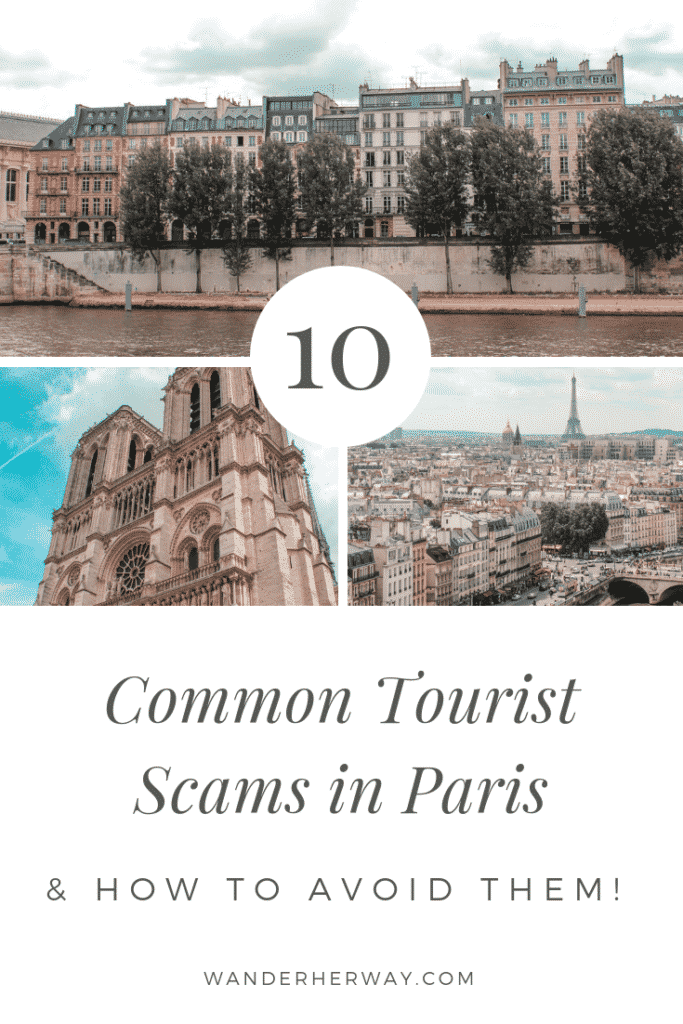