The Best Quotes About Paris

There’s no place quite like Paris. Few cities in the world have been immortalized so thoroughly through art, film, and writing as the City of Lights.

Here are some of the best quotes about Paris to inspire you:

“America is my country, and Paris is my home town.” – Gertrude Stein

“If you are lucky enough to have lived in Paris as a young man, then wherever you go for the rest of your life, it stays with you, for Paris is a moveable feast.” – Ernest Hemingway

“To know Paris is to know a great deal.” – Henry Miller

“When good Americans die, they go to Paris.” – Oscar Wilde

“A walk about Paris will provide lessons in history, beauty, and in the point of Life.” – Thomas Jefferson

“You know, I sometimes think, how is anyone ever gonna come up with a book, or a painting, or a symphony, or a sculpture that can compete with a great city. You can’t. Because you look around and every street, every boulevard, is its own special art form and when you think that in the cold, violent, meaningless universe that Paris exists, these lights. I mean come on, there’s nothing happening on Jupiter or Neptune, but from way out in space you can see these lights, the cafés, people drinking and singing. For all we know, Paris is the hottest spot in the universe.” – Owen Wilson

“Whoever does not visit Paris regularly will never really be elegant.” – Honoré de Balzac

“An artist has no home in Europe except in Paris.” – Friedrich Nietzsche

“I had forgotten how gently time passes in Paris. As lively as the city is, there’s a stillness to it, a peace that lures you in. In Paris, with a glass of wine in your hand, you can just be.” – Kristin Hannah

“To study in Paris is to be born in Paris!” – Victor Hugo

“Just add three letters to Paris, and you have paradise.” – Jules Renard

“Though I often looked for one, I finally had to admit that there could be no cure for Paris.” – Paula McLain

“That Paris exists and anyone could choose to live anywhere else in the world will always be a mystery to me.” – Marion Cotillard

“Breathe Paris in. It nourishes the soul.” – Victor Hugo

“London is a riddle. Paris is an explanation.” – G. K. Chesterson

“When spring comes to Paris the humblest mortal alive must feel that he dwells in paradise.” – Henry Miller

“Paris was a universe whole and entire unto herself, hollowed and fashioned by history; so she seemed in this age of Napoleon III with her towering buildings, her massive cathedrals, her grand boulevards and ancient winding medieval streets – as vast and indestructible as nature itself.” – Anne Rice

“Paris is the city in which one loves to live. Sometimes I think this is because it is the only city in the world where you can step out of a railway station—the Gare D’Orsay—and see, simultaneously, the chief enchantments: the Seine with its bridges and bookstalls, the Louvre, Notre Dame, the Tuileries Gardens, the Place de la Concorde, the beginning of the Champs Elysees—nearly everything except the Luxembourg Gardens and the Palais Royal. But what other city offers as much as you leave a train?” – Margaret Anderson

“There is but one Paris and however hard living may be here, and if it became worse and harder even—the French air clears up the brain and does good—a world of good.” ― Vincent Van Gogh

Which of these quotes about Paris is your favorite? I would have to say mine is #1 on this list. Audrey Hepburn said it best, “Paris is always a good idea.”

Let me know your favorite Paris quote in the comments!

For more posts about Paris, be sure to read the following: 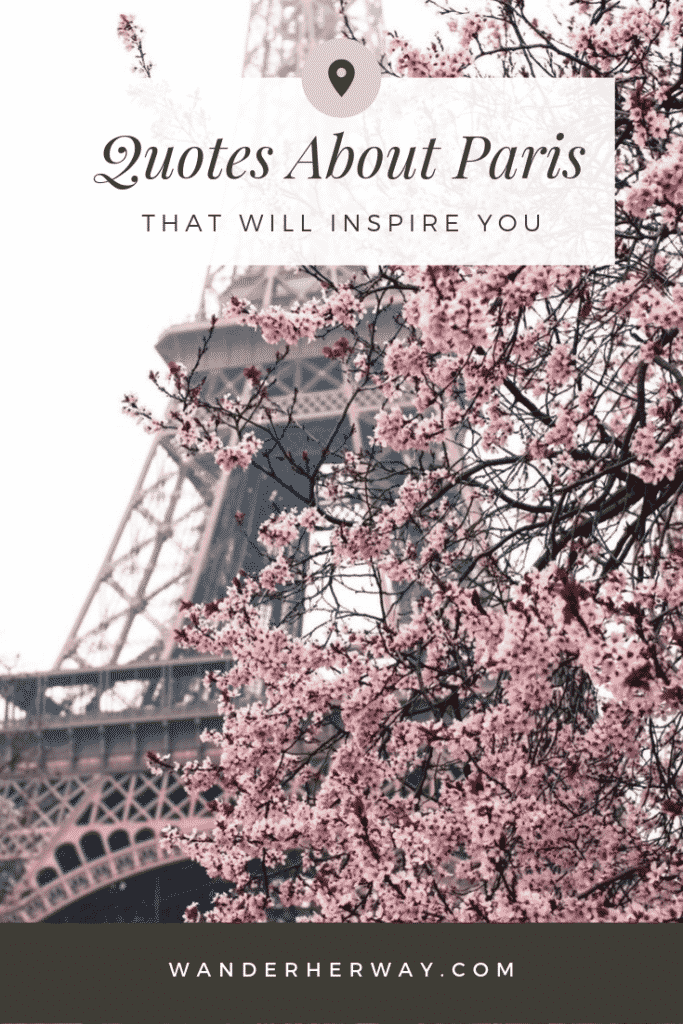