A lot of people always talk about their favorite destinations, but what about their least favorites?

I always enjoy reading stories about places people didn’t like for whatever reason. Sometimes it’s just fun to hear the negatives of a place, when most travel blogs only share the positives.

So I decided to put together this list of my LEAST favorite places I have ever visited.

I do have to admit, this list was a bit hard for me to put together, because I enjoy everywhere I travel. Even with these “least favorite” places, I didn’t flat-out dislike any of them.

I just liked them much less than my favorite destinations, and I wouldn’t be in any hurry to return to them (whereas with my favorites, I could travel there again and again.)

And if you offered me a trip to one of my favorite destinations like Paris or Lake Como, or a trip to any of these places, I wouldn’t hesitate when making my decision.

So with that being said, here are my least favorite destinations: 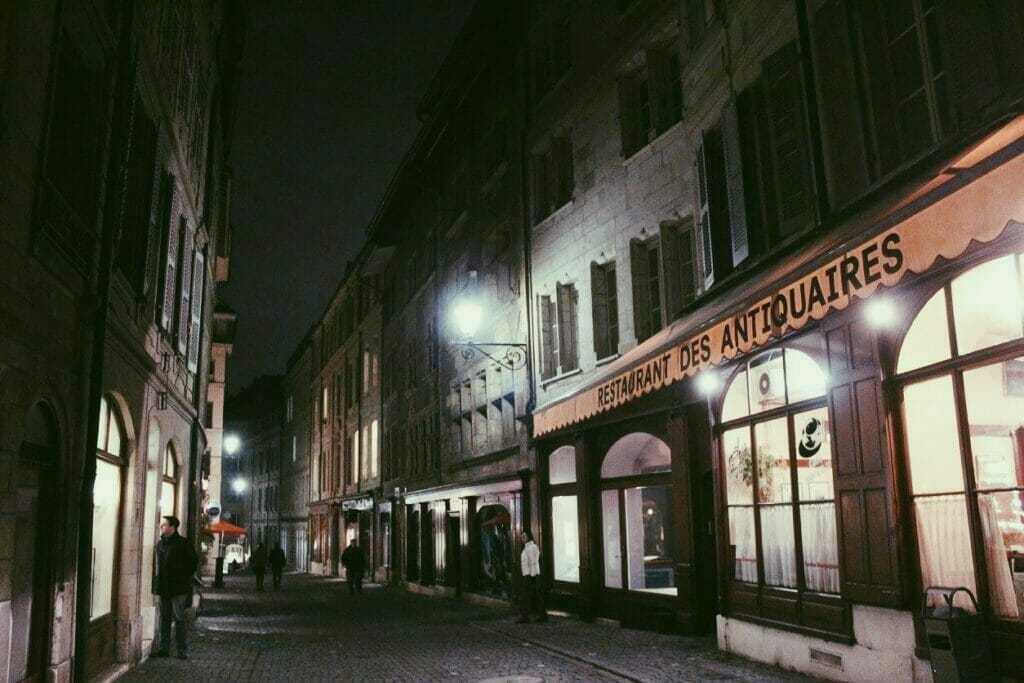 Geneva is the only place I’ve been in Switzerland and it didn’t leave me very impressed.

My friends and I went there for a weekend getaway from Paris, although we hardly spent any time in the city itself as we crossed back into France to visit nearby Chamonix to snowboard instead.

But from the brief time we did spend in Geneva, I didn’t really like it. It’s Switzerland’s financial hub, and so the city felt very corporate and bland. It’s also not as pretty or scenic as I was expecting (aside from a few cute streets like the one pictured above.)

And it’s by far THE most expensive place I’ve ever been on my travels. I’m pretty sure I paid the equivalent of $15 for a basic veggie sandwich at a food hall there.

However, I definitely want to return to Switzerland one day and visit many other parts of the country. I would just skip Geneva the next time I’m there! 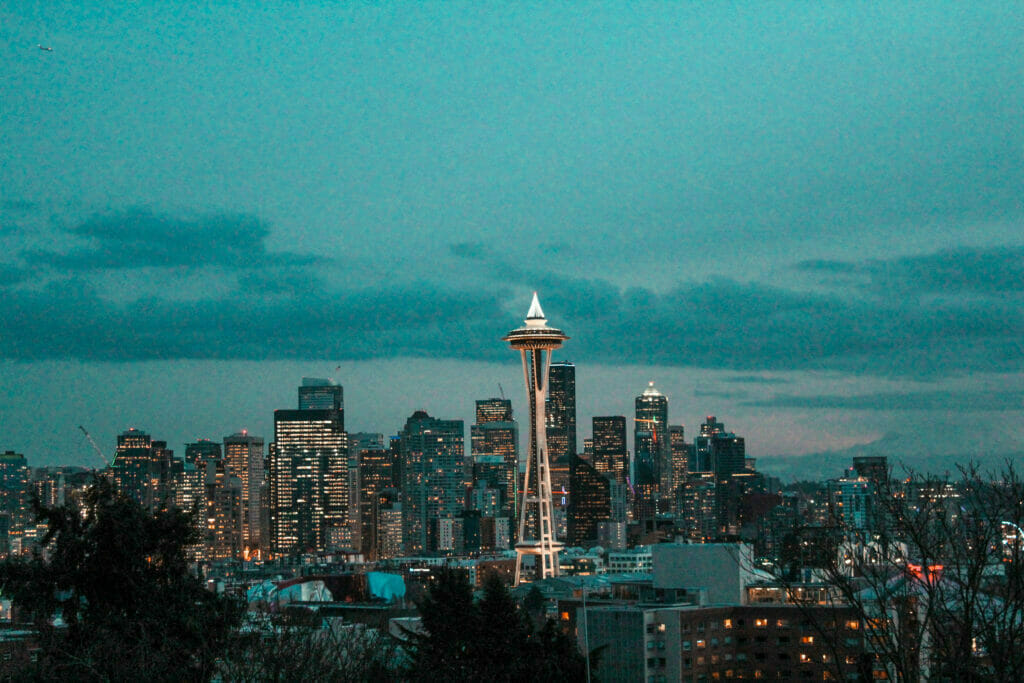 I’ve visited quite a few cities in the US (my home city of New York, Boston, DC, Philadelphia, Chicago, LA…) and I have to say out of all of them, Seattle is one of my least favorites.

Due to having some family there, I’ve actually been to Seattle several times but I’ve never really clicked with the city any time I’ve been. I want to like it, but something about it just isn’t for me.

If you’re really into outdoorsy activities, it’s a great place to live. There are plenty of mountains and national parks you can day trip to. But the city itself is underwhelming and bland to me. And it doesn’t help that the weather is so often rainy and overcast.

I’ve also been there twice at Christmas and been let down by how un-festive the city feels. Then again, nothing compares to Christmas in New York… 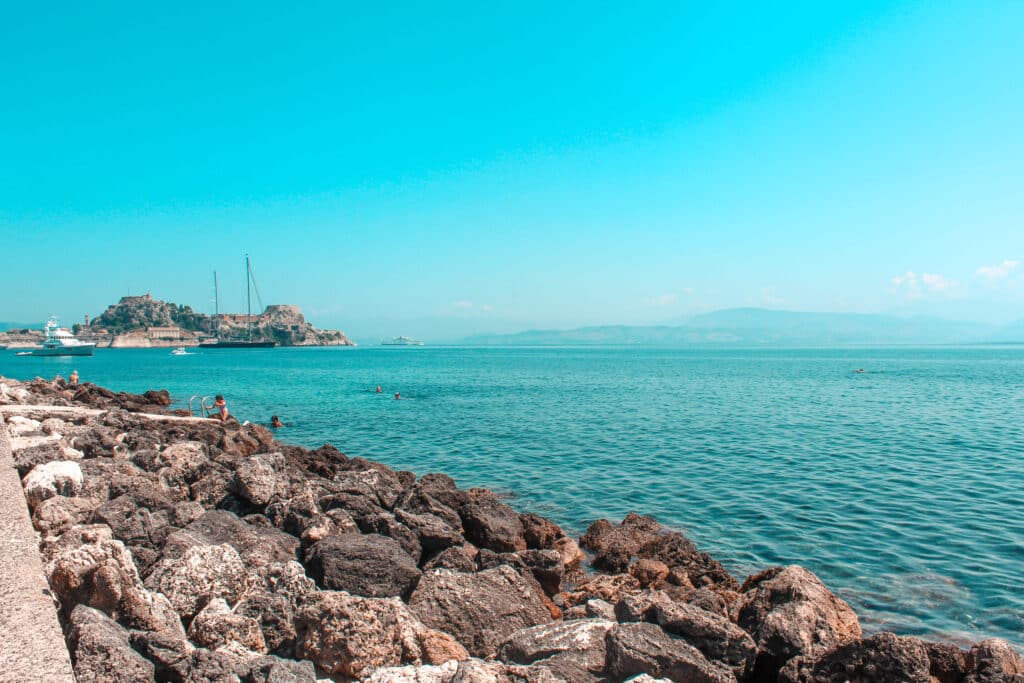 I visited three islands during my time in Greece: Corfu, Mykonos, and Santorini. And I have to say, Corfu was by far my least favorite of the three. Mykonos and Santorini are truly as beautiful as they look in photos and worth the hype, whereas Corfu was… underwhelming.

It is a good deal cheaper than the more popular Greek islands, but it lacks the dramatic scenery of Santorini and the good beaches of Mykonos. Although I only spent one day on Corfu, I just wasn’t impressed by it. The beaches were rocky and mediocre, and the main town had nothing to offer.

While I definitely want to go back to the Greek isles one day, Corfu is one I’d be fine not revisiting. 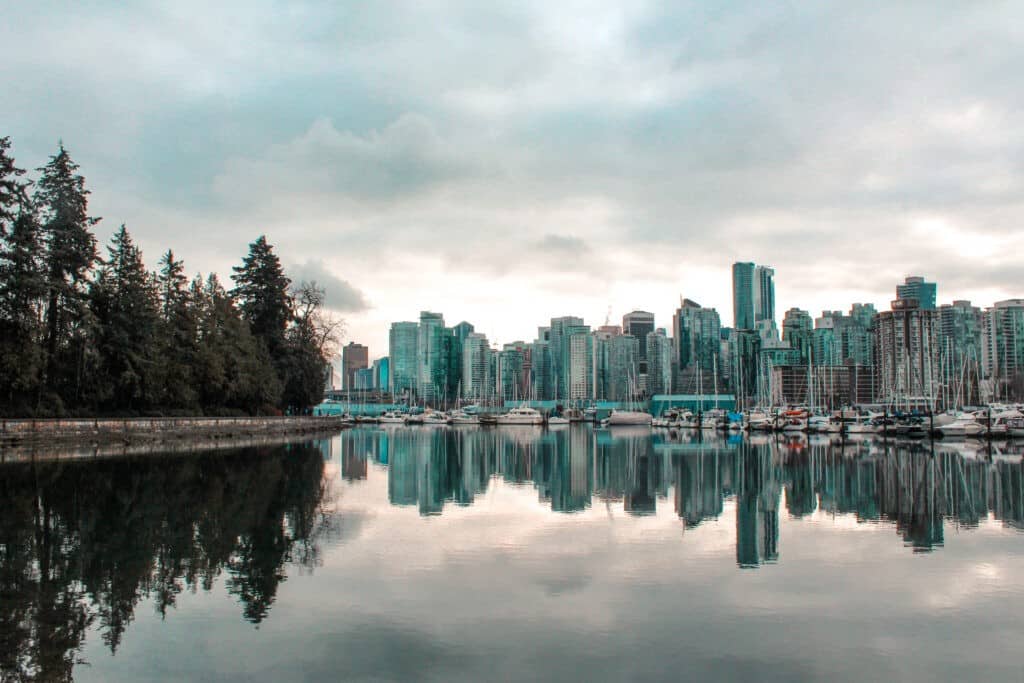 Another strike against the Pacific Northwest from me goes to Vancouver. As a whole, I just don’t think I really like this region. I visited Vancouver on a weekend trip from Seattle.

Just a few hours from Seattle by train, I was excited to visit one of my Canadian friends I’d met while studying abroad. While it was good to see her, I was not very enamored with Vancouver itself.

Like Seattle, it was dreary and rainy most of the time I was there. It did clear up some on my last day, and I took a long walk around the scenic waterfront Stanley Park (pictured above) but I still wasn’t sad to leave and I’m in no hurry to return.

Something about the city just didn’t click with me. I also had the worst customs experience of my life entering AND leaving Canada with the rudest border agents I’ve encountered anywhere. So much for the stereotype of Canadians being friendly and welcoming! 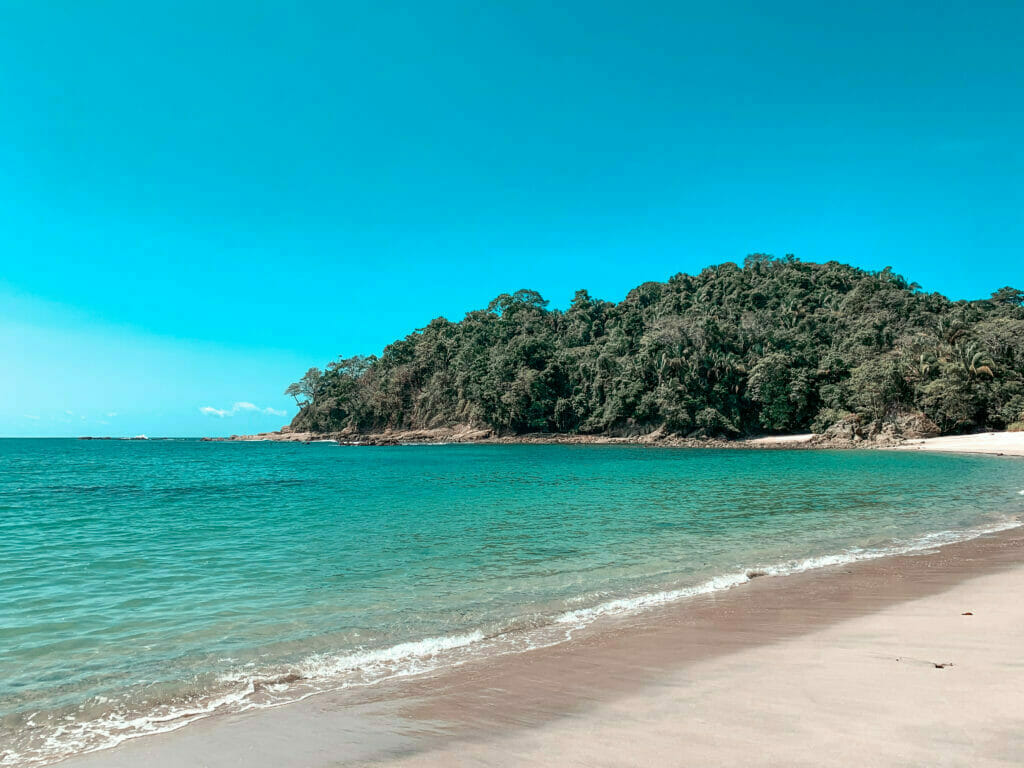 The first thing I’ll say is Quepos is absolutely worth a visit due to its proximity to Manuel Antonio National Park. The national park is AWESOME, and one of the best places in Costa Rica. Beautiful beaches, lots of walking trails, and plenty of wildlife like monkeys and iguanas.

But the town of Quepos itself left a lot to be desired for me compared to the rest of Costa Rica.

This is definitely a destination I just disliked because of the people. The scenery was gorgeous, but it was definitely the most touristy part of Costa Rica I visited, and I vastly preferred the beach town of Puerto Viejo on the Caribbean coast instead. 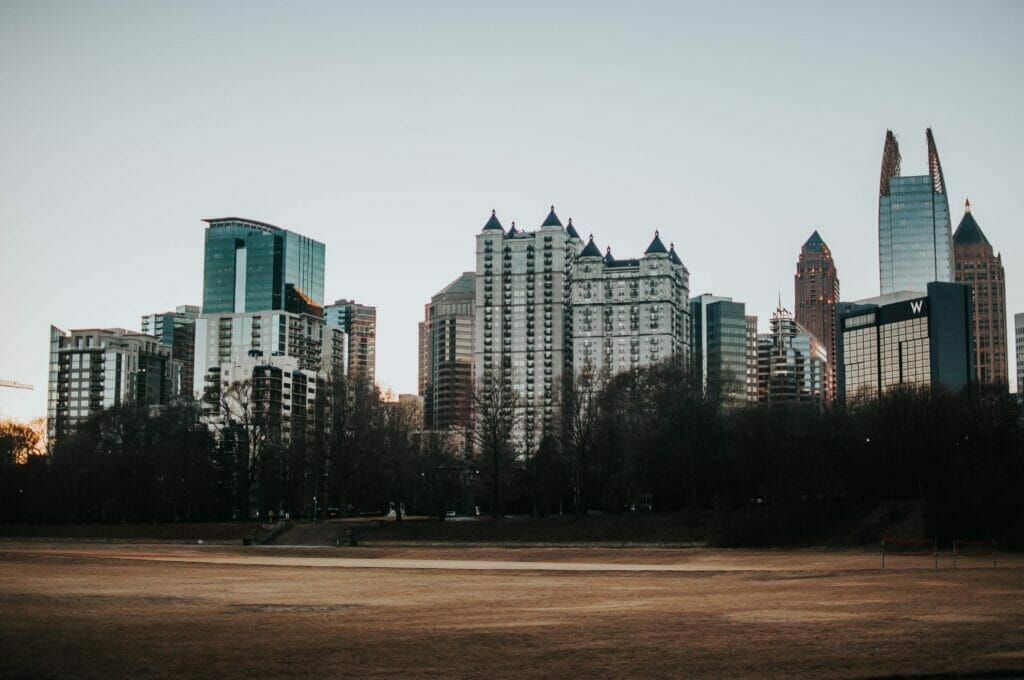 This one is kind of cheating, because Atlanta isn’t a destination I’ve visited on vacation, but I DID live there for four years during college and I couldn’t wait to leave.

Like Seattle, Atlanta comes to mind as one of my least favorite US cities that I’ve been to.

In fact, I didn’t even take a single photo of the city in all the years that I lived there, so I’m having to use a stock photo, which I think shows how little I cared for it!

Atlanta is extremely hot and humid for the better part of the year. It’s not walkable at all so you NEED a car to get around, and the traffic is terrible. It’s not a pretty or impressive city. Overall, it just doesn’t have the “wow” factor of other U.S. cities for me. It’s also not near a major body of water, and I’ve found I tend to like cities with a river/bay/lake in them.

I do have some nostalgia for Atlanta since I went to college there, and I do think it’s a city worth visiting for its history and cultural impact, but it’s just not one for me. 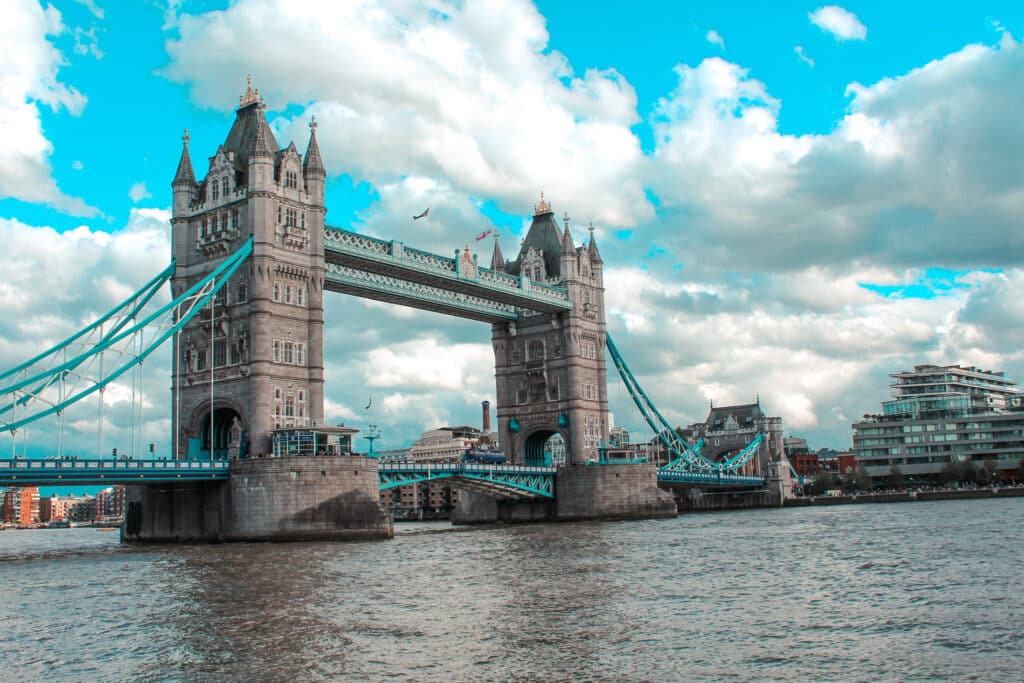 London is a city that I think I COULD really love, but I just haven’t spent enough time there or done the right things on any of the times I’ve visited yet.

I’ve been to London a few times now, most recently at the start of an England road trip, and I preferred the English countryside so much compared to being in the city.

London seems like the type of big city I should like (since I love New York and Paris so much) but it has just never clicked for me. Some of it might be due to it being such a large city that it can feel underwhelming, and I’ve only ever spent a couple days there at a time.

That being said, I’ll definitely return to London in the future, and hopefully click with it more!

So there you have it, my least favorite destinations that I’ve traveled to!

As I mentioned at the beginning of this post, I didn’t totally dislike any of these places. I have good memories from visiting every place on this list, and I definitely think each of these destinations is worth visiting! However, they just weren’t my personal favorites.

What about you? What is your least favorite destination you’ve been to?