Top 10 Things to Do in Athens, Greece

This post is all about the best things to do in Athens, Greece.

Athens is a city that really surprised me. I had been to Greece before on a cruise, spending three days in the Greek islands. But I had never been to its capital.

This summer, I finally visited Athens and loved it! Before I went, I had only heard a few semi-negative things about it, such as it’s dirty, noisy, and crowded, and you only need a couple days there before going to the Greek islands. These things could not be less true!

Athens ended up becoming one of my favorite cities in the world, and I spent nine days there.

I think it’s an absolute must on any Greece itinerary. If you can only spare two or three days there, that’s fine. You’ll still be able to see most of the highlights. But if you have more time to spend in Athens, you won’t regret it and I guarantee you will fall in love with the city!

Here are some of the best things to do in Athens, Greece:

The Acropolis is by far the most famous sight in all of Athens.

Sitting on a hill above the city, this ancient complex features the Parthenon and other structures. But before you head to the Acropolis, I recommend hitting up the Acropolis Museum.

I went to the Acropolis first, then went to the museum, and I wish I’d done it the other way around!

The Acropolis Museum, located down the hill from the Acropolis itself, contains marble sculptures and other relics that were excavated from the Acropolis and now must be kept indoors to protect them from the elements. You’ll gain so much more context about the Acropolis, and be able to envision what the structures looked like back in ancient times, by visiting this museum.

The museum also offers amazing views of the Acropolis, as well as an outdoor cafe.

The Acropolis was built over 2,500 years ago in dedication to Athena, the patron goddess of the city. (Athens… Athena… see the similarity there?!) There are quite a few ruins in the complex, including the iconic Parthenon, the Temple of Athena Nike, and the Theater of Dionysus.

The best time to visit the Acropolis is in the evening. In the summer months, the Acropolis is open until eight, so you can get there around six and still have plenty of time to explore after things have started to cool down. You could also go first thing in the morning when they open.

Be aware that there’s very little shade at the Acropolis, and the sun gets scorching hot up there! So wear lots of sunscreen, a hat, and pack plenty of water!

Aside from the Acropolis, the best ruins to visit in Athens is the Ancient Agora.

The Agora was the center of life in Athens, and it’s where all the famous philosophers hung out and exchanged ideas. Most of the ruins here are just piles of rock and bits of columns BUT there’s one that’s incredibly preserved, the Temple of Hephaestus.

There’s also a museum in the complex that’s included with your admission and has lots of marble sculptures showing the progression of style through antiquity.

Wandering around the Agora, you’ll also be treated to great views of the city and the Acropolis. This is another place I recommend going in the evening. Unlike the Acropolis, which I visited at the hottest time of the day, I did actually go to the Ancient Agora in the evening and it was amazing.

Like the Acropolis, it’s open until eight in the summer, so you can get there around six.

One of the first things I do in every city is take a free walking tour.

They’re a great way to get acquainted with a new city and see the highlights. This is the tour I did and I highly recommend it. It’s 2.5 hours and you’ll see some awesome places in Athens.

I know I keep recommending things to do in the evening, but the same goes for this walking tour!

I did the walking tour offered at six in the evening and was so glad that I did. By then, it had started to cool down and the sun wasn’t as strong. We also got to see the sunset at the end. Honestly, I can’t imagine walking around Athens for a whole 2.5 hours in the heat of the morning or afternoon.

One other thing to note, even though it’s a free walking tour, remember to tip your guide!

One of the best things to do in Athens, Greece is enjoy the sunset.

I’m so glad I was able to discover the amazing little neighborhood of Anafiotika on my free walking tour, because otherwise I doubt I would have ever found it!

Anafiotika is a neighborhood nestled below the Acropolis, adjacent to the more touristy Plaka neighborhood. It was built in the 18th century by workers from the Cycladic island Anafi, who designed it to resemble their villages at home on the island.

You’ll find white-washed homes adorned with colorful flowers, tiny stone alleyways, bright blue doors, and incredible views over the city in this neighborhood. Basically, it feels like you’ve stepped into a village on one of the Greek islands like Santorini, but you’re right in the heart of Athens!

7. Enjoy the views from a rooftop

One of the cool things about Athens is that since the Acropolis is built so high on a hill above the city, most rooftops in the city have an amazing view of it.

There are plenty of rooftop bars and restaurants to choose from in Athens, where you can enjoy stunning views over the city and the famous hilltop ruins. I recommend going to one for dinner once it gets dark so you can see the Acropolis illuminated at night!

8. Relax in the National Garden

I ended up going to the tranquil National Garden several times while I was in Athens in order to escape the heat. This lush park is right in the center of Athens, yet it offers a respite from the hustle and bustle of the city. Take a stroll through its many shaded paths in the afternoon.

Then pop over to Syntagma Square, which is adjacent to the park, to watch the Changing of the Guard outside the Hellenic Parliament, which happens every hour on the hour. I don’t know what it is, but something about these ceremonies is always so entertaining to me.

9. See the city from above

There are two big hills in Athens that offer scenic views stretching all the way to the sea: Lycabettus Hill and Filopappou Hill. The latter is a bit more central, located right behind the Acropolis.

Both offer great views and are good places to catch the sunset. I only went up to Filopappou Hill, which is only accessible by foot and is a twenty-minute walk. Apparently, you can walk or take a taxi or cable car to the top of Lycabettus Hill. It’s also about a twenty-minute walk up, but steeper.

The National Archaeological Museum is the only thing on this list that I did not personally do while I was in Athens, but it came so highly recommended that I had to mention it here.

It contains artifacts from archaeological sites all over Greece from prehistoric times to late antiquity. So if you’re looking for more ancient history, this is the place to go.

You could easily spend a few hours wandering around this massive museum, which would be a good place to visit in the afternoon when it’s hottest outside in order to stay cool.

Save Money on Things to Do in Athens

One thing to note when visiting Athens is that you might be able to save money by purchasing the combined ticket for Athens’ most popular archaeological sites.

The combined ticket includes admission to the following:

The combined ticket costs €30 and is valid for 5 days from the day of purchase. You can buy it in person at the ticket counter for any of the sites listed above.

However, if you qualify for reduced admission, it’s probably going to be cheaper to just buy your ruins tickets individually rather than getting the combined ticket. Depending on your age and where you’re from, you might be able to get reduced (half price) tickets or even free tickets.

So do a little research before you go and double check that buying the combined ticket is going to be a good deal for you, but for the majority of adults, it will save you money.

Also, it’s important to note that if you are traveling to Athens in the off season (November through March) many of the ruins and museums have reduced admission for everyone. So visiting in the off season can be a great way to save some money, and enjoy less crowds and milder temperatures.

Best Things to Do in Athens, Greece

This post showed you some of the best things to do in Athens, Greece.

Athens ended up becoming one of my favorite cities and I hope that it will become one of yours too! Between the incredible history, great food, beautiful views, and fun vibe, Athens is a great city and just might end up being the highlight of your trip to Greece. 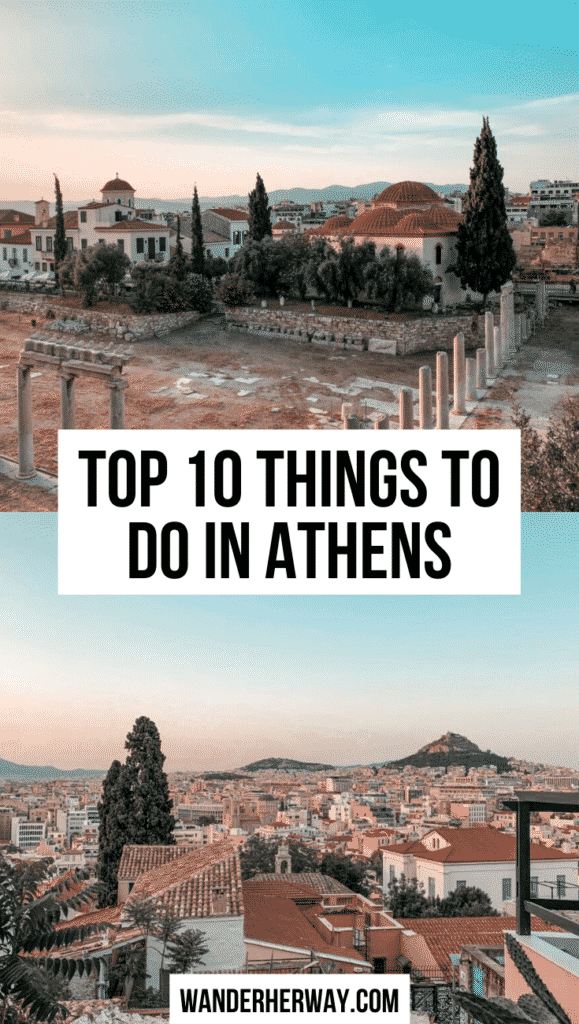